There is a special kind of ring in Ireland called The Claddagh Ring, which is a traditional wedding ring in Ireland. Many Irish families have rings with such symbol, and it is also common on their door knockers. This patterned ring is also passed from mother to daughter, and is passed on from generation to generation. Many people also use it as a sign of their faith.

People who have watched the movie "Leap Year" will definitely remember the seaside cliff where the hero proposed to the heroine, the beautiful scenery in sunset is a great place to propose. The ring used by the hero to propose to the heroine in Leap Year is the Irish special ring: The Claddagh Ring. But today we do not talk about scenery, we talk about the romantic legend mentioned in the movie and the Irish Claddagh Ring that appeared.

The Claddagh ring is a traditional wedding ring in Ireland. It is part of the Irish cultural heritage and symbolizes love, friendship and loyalty. 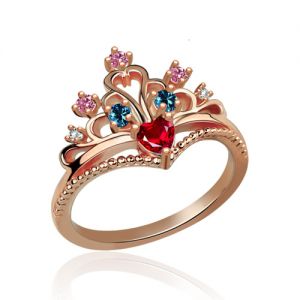 In Ireland, there is a beautiful legend: As long as the woman proposes to the man on the day of the leap year, not only will the marriage be completed, but future marriage will be happy. People believe that leap years are a good opportunity for women to propose to the other half. Such legends give people more sincerity and longing for love.

Its general design is a heart in two hands, and a crown on the heart, which means “With my hands I give you my heart, and crown it with my love my love.” It also means “Let love and friendship reign forever.”

The Origin of Claddagh Ring

The Claddagh Ring was born in the fishing village of Claddagh, Ireland, in the 17th century. This fishing village is located just outside the old walls of Galway. The legend of the ring has been in Ireland for more than 400 years. There are many legendary versions. One of them is about a man named Robert Joyce who left his hometown to work in West India and plans to marry his lover after returning home. But unfortunately his ship was trapped and he was sold to a goldsmith in Morse as a slave. He followed his new master to Algiers and learned the skills of forging gold jewelry. After William II inherited the throne, he ordered all Moors to release British prisoners. The goldsmith appreciated Robert and promised to give him his daughter and half of his possessions, as long as he stayed. But Robert refused. He returned to his hometown and gave his lover a ring he had made while studying. Later they got married.

Another legend is about a prince who fell in love with ordinary woman. In order to prove his steadfastness to the girl's father, and prove that he was not taking advantage of the girl, the prince created a claddagh ring to propose to the girl. When the girl's father heard the meaning of the ring, he agreed to marry her daughter to the prince and gave his blessing.

There is also a legend about Margaret Joyce, another from the Joyce family. It is said that she married a Spanish businessman and followed him to Spain, but unfortunately the businessman died later, leaving Margaret with a large legacy. Margaret returned to Ireland with the money and married the then mayor of Galway. For charity, Margaret used her inheritance to finance the construction of the bridge in Connaught. One day, an eagle gave a claddagh ring and placed it on Margaret's knee in return.

There are many styles of Claddagh rings, and the use of materials is also different (including gold rings, platinum rings, diamond rings, silver rings, rose gold rings, emerald rings, etc.). It is also divided into male and female models, each style has its own craftsmanship, but the overall style is the shape of two hands embrace a heart, there is a crown directly above the heart. The moral is "let love and friendship dominate everything". Such a poetic declaration allowed a legend about the ring to continue in Ireland for more than 400 years. Using a Claddagh ring to encircle the fingers of the two is to encircle the happiness of a lifetime.