Marriage is sacred. Many girls have longed for what their wedding looks like. As a carrier of love between the two parties, the diamond ring has a meaning that cannot be ignored. But when it comes to wearing a diamond ring, there is a new confusion: is the diamond monogram ring worn on the left ring finger or the right ring finger? Is there any difference in wearing on these two fingers? 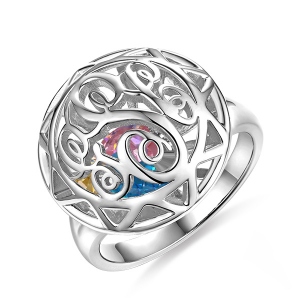 Wear on the left ring finger:

Many young people will think about wearing on the left ring finger. It is often said that the ten fingers are connected to the heart, and the ring finger is a finger that reaches the heart. Putting the ring on the ring finger is to put the lover firmly in the heart, and it will last a lifetime for each other.
In daily life and work, it is also more convenient to wear it on the left hand. After all, most people are used to the right hand, which will inevitably cause friction and collision with the diamond cheap promise ring. If you accidentally damage the diamond ring or cause it to fall off, you will suffer loses.
When it comes to wearing on the left hand, you have to mention Western habits. Many young people nowadays advocate romance and freedom, so they will choose Western-style weddings. So in which hands do you wear custom birthstone rings in Western weddings? The answer is also our left ring finger! Because many western countries believe that the left hand holds happiness. It is a fortunate thing for two people to overcome all kinds of difficulties and march into the palace of marriage together. Wearing on their left hand is also a way of thanking God for sending their lover to them, and also receiving the blessing of loving God.
Wear on the right ring finger:
Right hand ring finger meaning: Some people will consider the traditional thinking of "men on left and women on right" when wearing a diamond ring, so they wear a wedding ring on the right hand. When the two walked together, the two diamond rings shined brightly, shining with happiness belonging to the two. Wearing the diamond ring on the right hand and you can often see it at work. You will often think of the sweet time between the two, and feel that life has become easier and sweeter.
The right ring finger also says that a couple in love wears a ring on this finger. If you wear a wedding initial ring on the right ring finger, it is also hoped that after marriage, it will be as sweet as when in love, and the feeling will not be consumed in the river of time.
Wedding rings are treated carefully by women throughout their lives, and they are carefully stored. It is a habit for them to get up and wear a wedding ring. For a wedding ring, it is a commitment to the family and a sincere heart for you. No matter which hand you wear, there is no exception in anticipation of your future.

Wedding personalized birthstone rings are usually worn on the third finger of the left hand. You can also wear them according to your local customs. The diamond ring is not only a shining jewelry, but also a testimony of your love.

Wedding rings are generally what we call rings. This ring is worn on the ring finger of the right hand and will not be removed, so the style is very simple. The decision to reach a balance of material and interests in the families of both parties will be your life's home and trust, and the engagement will be used as the basis for the relationship between the two in the early stage. It is also for the sake of adaptation that the ring exchange is attributed to each other, symbolizing good expectations and blessings.

Which finger is for the engagement ring?