The Romans believed that there was a vein on the ring finger that went directly into the heart, and they called it "the vein of love." Therefore, a couple in love will wear a ring symbolizing love and loyalty on this finger. In fact, we now know that there is no such vein, but everyone is still willing to believe this beautiful story. So in many countries, the tradition of wearing engagement and wedding rings on the ring finger of the left hand continues. Wearing a ring becomes a way for men and women to commit to each other. 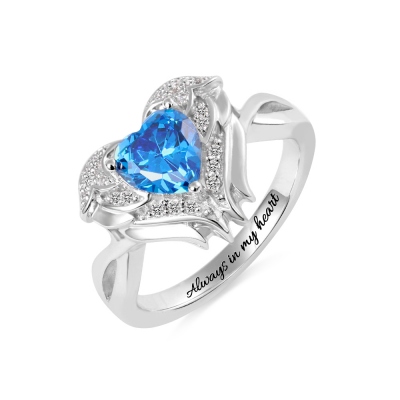 The circle of the promise ring symbolizes life and eternity. The ancient Romans believed that the ring finger is the finger guarded by the sun god Apollo. Therefore, wearing a ring on the ring finger, especially a diamond ring with a solar power, can strengthen love and make love last forever. The rings in the ancient Roman period were simply iron rings. Later, due to the custom of ancient Rome, promise rings became indispensable love tokens before marriage and continue to this day.

The origin of the promise ring in Chinese saying is: In ancient times, the king will give a silver ring as a voucher to her favorite concubine, and when she gave birth to the child, it was replaced by a gold ring. Later, ordinary people also used rings as proof of pledge in love and gradually evolved into promise rings.

Some people think that a promise ring is a ring given before engagement. Because an engagement ring will get people asking for details about your proposal, such as: how did he propose, when did he propose, what color did you wear, and where do you plan to get married? If you don't want to jump right into the wedding preparation process, you may choose to wear a promise ring.

Most women want a man to give them a small ring, even if it is silver, copper, or grass. Unlike engagement rings and wedding rings, the promise ring is a tradition that dates back to the 16th century, but it is a widely misunderstood tradition that is used to express commitment after engagement. Because some couples may not be ready for their upcoming marriage, but want to show their commitment in some way.

Today, a promise ring can have many personal meanings: usually it is a symbol of exclusive sexual relations or love. For those couples with a stable relationship, giving promise rings is an ancient tradition, which symbolizes their love and commitment to each other. It could also mean that the couple promised to get married someday. Or in the case of pure rings, they may have promised to maintain their virgin status until they get married.

On which finger is the promise ring worn? There are no hard and fast rules. Some couples wear them on the ring finger, but since this is not a formal engagement ceremony, others have chosen different fingers. Once married, the traditional practice is to move the promised ring to the ring finger of the right hand.