In addition to twelve constellations and zodiac signs, you must know your birthstone clearly, the birthstones in the month of your birthday is usually used to bring you good luck. Personalized a necklace with names and birthstones for yourself is a good choice. 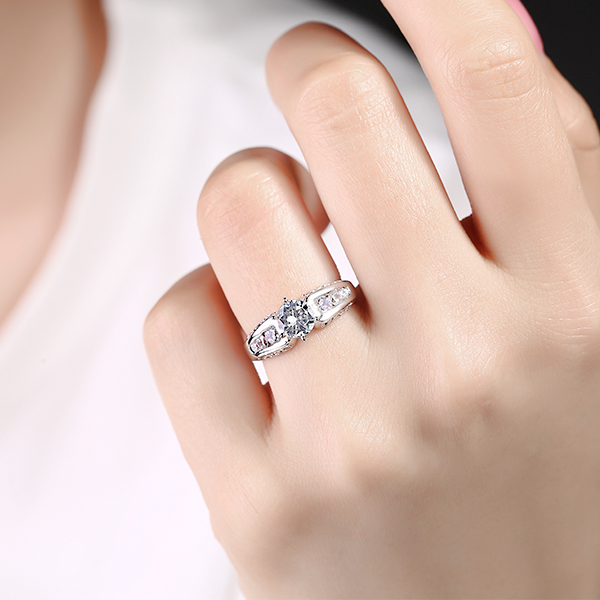 Garnet crystals and pomegranate seeds are very similar in shape and color, hence it is called "garnet". From the time of ancient Egypt, people regarded the garnet as a sacred object created by the sun god, because it shines like the sun.

Garnets are less prone to cracking or scratching and are highly durable in a variety of gemstones. The most common colors of garnet are deep red and orange. But in fact, it also has other colors! Garnet is also very rich in cutting methods. It can be a bright and gorgeous effect or a clear effect through the interior of the gem. Can you guess the green stone- Tsarvorite, which is often used to make fancy jewelry is also a garnet? The rich red-orange garnet looks warm, like the sun on your fingertips. It is a gem that makes people happy and full of happiness.

Amethyst is one of the most noble and beautiful members of the crystal family. It is also called stone of Feng Shui. The Japanese call amethyst an energy stone. Amethyst has a purple color because it has a trace of iron and iron oxide is the main cause of its bright purple color. Amethyst colors range from light lilac to deep purple, and deep purple is the most valuable, especially rich purple rose.

Like Sweden's Crown Princess Victoria, there is a crown with amethyst as the main stone. In particular, she is also wearing a purple dress of the same color, the shape is not only dignified but also more temperament and noble. Amethyst, the personification of romance, is often associated with love and is known as the guardian stone of love. In Greek mythology, there is a story about how amethyst came from: a beautiful girl refused the courtship of the wine god in order to keep her purity, and God turned her into a white stone. The wine god grieves and pours the wine on the stone, and the stone turns into amethyst. Cocktail rings, in particular, often use large amethyst stones. This large-scale gemstone cut surface can enjoy the unique inclusion of amethyst - natural ice crack. At first glance, it is like putting a mysterious noble veil on the amethyst.

The English name for aquamarine is derived from the "seawater" in Latin. This is because ancient people found that the color of aquamarine is as blue as seawater. It is believed that this beautiful gem must come from the seabed. Since then, aquamarine and "water" have an indissoluble bond.

Aquamarine belongs to the beryl crystal. The original stone is usually a large block of large pieces, which is very suitable for making large pieces of jewelry. For example, the crowning gift of the Queen of England is a set of aquamarine necklaces and earrings from Brazil. The Queen liked it so much and specially invited people to make a set of aquamarine crowns to wear. Princess Meganalso chose to wear a aquamarine ring when she was married. This ring comes from Prince Harry's mother, Princess Diana. A good gem can be passed down. The aquamarine has also been given a boost by Princess Megan 's wearing of it.

Diamond has the reputation of being the king of gems, not only because it is the hardest substance in nature, but also it has the highest refractive index and dispersion in the natural gemstones that are colorless. A diamond that is proportioned to an ideal cut will has a colorful brilliance.

Emerald is the eldest of beryl family, ranking among the world's top five gemstones and ranking first among green gemstones. The unique color of emerald is fresh and vivid. It will change due to the weather or the natural and artificial light source, but it always vividly emits different soft and rich light.

The main producing areas are Colombia, Brazil, Zambia and other places, of which the best quality in Colombia. In jewelry, the common emerald is large carats, which is an atmospheric beauty. Looking through the large gemstones, the emerald's inclusions are like a seaweed in the deep sea, giving the emerald a unique beauty. The emerald jewels of the small carats are inlaid together and shows a delicate beauty. The small carat's emerald jewelry is particularly delicate and is very suitable for everyday wear. It's like a touch of bright green on the skin, beautiful and dazzling.

The changing stone is called alexandrite. It is an alumoberyl in mineralogy, because the stone contains trace amounts of chromium, making it green in the sun, and has red discoloration effect in candlelight and incandescent light

Ruby is derived from the Latin word "Rubens". The primary evaluation factor for ruby is color, the best is darker red, the most valuable color is called "pigeon blood red", it is red like blood; secondly is weight, transparency and clarity. Sometimes the numerous inclusions prove the naturalness of the ruby, but also its unique personality and characteristics.

Ruby is also the most precious jewel in the Bible and the embodiment of the Phoenix. However, the most widely known synonym for ruby is "stone of love". The intense red color has always been associated with love.

As early as the ancient Indian period, rubies were regarded as the "king of gems". In the movie Wizard of Oz, Dorothy wore a pair of magical ruby shoes that gave her strength and protected her from the witch's magic. Natural rubies are rare, and rubies over 2 carats are rarer! The most expensive and rarest category in ruby is the pigeon blood red! Not all rubies can be called pigeon blood red. Only rubies from Myanmar and Mozambique with a certain level of color can be called pigeon blood red. The blood red color of the pigeon is very rich, especially when viewed under the light. The inside of the gemstone is like a burning flame, bright and moving. A special collection of ruby works - Treasure of Rubies has been launched recently. Every piece of ruby is amazing. One of them, a 25.76-carat ruby stone, has been made into detachable jewelry that can be turned into a brooch or even attached to a cocktail ring.

Peridot symbolizes peace and happiness, so it is also known as the "stone of happiness." Peridot is not only the birthstone of August, but also the national stone of Egypt. The ancient Egyptians believed that the light green peridot had the energy of the sun, so peridot is often used as a talisman. Peridot is named for its olive-like color, most of which is olive green or yellow-green. The peridot that reaches the gem level is also known as the chrysolite, and its translucent texture is very beautiful. The color of the peridot is also very bright and moving, and the faint tender green is full of vitality. Just like the fresh fruit of summer, it is cool and heart-warming. Many colored gems have inclusions inside, which look like a kaleidoscope from childhood. The inclusions inside the peridot are like the leaves of a water lily, so they are also called the lily pad inclusions. The color of the peridot is very nice, but it also picks the skin color, for such a special yellow-green color, you must be white enough to hold.

Like rubies, sapphire has many legendary praises. The ancient Persians believed that the earth was sitting on a bright sapphire, and the sky was like a mirror, reflecting its color. Sapphire is a general term for all colors of corundum except red color.

Sapphire is often called the "stone of the emperor" because of its noble and elegant dark blue, which is favored by the royal family. Sapphire is produced in many places, Sri Lanka, Myanmar, Kashmir, etc. are often heard. The most famous is the Kashmir sapphire. However, the Kashmir sapphire ore resources have been exhausted, and as a result, the price of Kashmir sapphire has been rising and it is very expensive. When it comes to the most famous sapphire item, it's hard not to mention the sapphire ring that Prince William gave to Princess Kate, which was the wedding ring of his mother, Princess Diana. The large carats of sapphire are often used to make elegant and extravagant high-end jewelry. The jewels made by the small carat sapphire are more elegant and delicate.

Because tourmaline is thermoelectric and piezoelectric, it is easy to absorb dust. Therefore, when it is placed for a period of time without wearing, it need to be degaussed and purified, then wipe it gently with a soft cloth.

Topaz was originally found on the island of topaz in the Red Sea, which is often shrouded in thick fog. In order to mining topaz, people must spend a lot of effort to find. It is also a gemstone with multiple colors. The evaluation of topaz is based on color, clarity and weight.

The correct gemstone name for Tanzanite is blue zoisite. Tanzanite was first discovered in northern Tanzania in 1962, and it is still the only production place of tanzanite. Its dark blue with a light purple tone is one of the most vibrant colors in the world.

One of the most memorable Victoria's secret shows of all time must be the concept of “Sky-high underwear”. There is a sky-high underwear that has been made into the leaves of champagne gold, which looks very beautiful. The most eye-catching and extravagant is the few drops of blue pear-shaped gems. They are actually called topaz. Perhaps the topaz that everyone has heard is generally blue, but the color of the topaz is basically colorless or light blue. Natural blue topaz is very rare, and the beautiful colors on the market are actually the result of deep treatment. The natural colorless topaz is first subjected to radiation to give it a brown hue, and then further heat treatment before it appears blue. And the different blue colors also have their own names. The relatively clear and transparent light blue is called sky blue, the sky-like blue is called Swiss blue, and the London blue is deep blue like the sea. Topaz is especially popular because it doesn't cost too much and can be cut with all kinds of fancy cutting effects.

Whoever buys the unique gem wants to be different from others. Wear birthstone necklaces to show your extraordinary confidence and personality.

Thanks for Subscribing!
Trustpilot